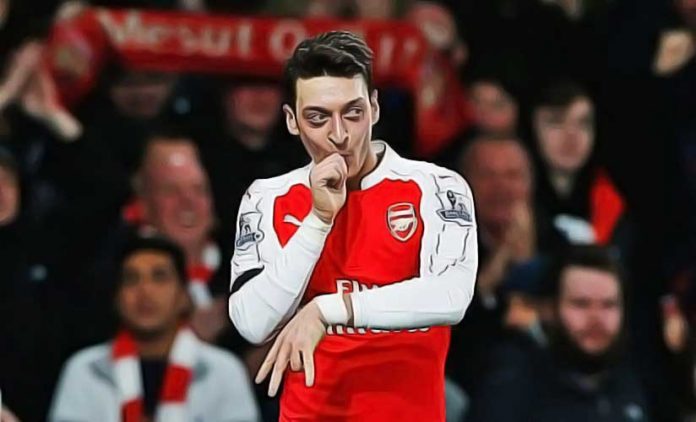 Are you a fan of Mesut Ozil? Looking for interesting Quotes by Mesut Ozil? If so, then you are completely in the right place. But before that, let us get to know the background of this famous figure.

Born on 15 October 1988, Mesut Ozil is one of the top professional footballers. Right now, he plays for the Turkish Süper Lig club, Fenerbahçe S.K. His favorite position on the field is an attacking midfielder, but he also can play as a winger.

Ozil has been nicknamed “The Assist King” due to his heroic and excellent past performance. Although he was born and raised in Gelsenkirchen, German, he actually has Turkish bloodlines as his parents are Turkish Immigrants.

Özil started his senior career by playing for hometown club Schalke 04, before signing with Werder Bremen in 2008, aged 19. After giving an amazing and fantastic performance, he earned himself a ticket to move to a giant club by joining Real Madrid in 2010.

His record there was so outstanding. He has helped the club win a La Liga title as a team. Moreover, he has been ranked first in the league for assists in three consecutive seasons for the individual record.

In 2013, he signed a contract worth up to £ 42.5 million (EUR 50 million) for Arsenal, where he was a club-record transfer and also the most expensive German player at that time.

In English Premier League, he helped Arsenal to win three FA Cups and end the club’s nine-year trophy drought. He also records the second-most assists ever in a Premier League season. However, in 2021, Özil joined Fenerbahçe on a free transfer.

His heroic performance does not show in the club only. He also helped his national team, Germany, twice to reach the semi-final. In fact, Özil actually helped Germany to win the 2014 FIFA World Cup.

Thus, to become successful, you need to get advice from a successful person. Without further ado, let’s be inspired by Mesut Ozil’s quotes.

“I am the sort of player that likes to create goals. I think a lot of my team-mates know me as a player who is not selfish.” – Mesut Ozil

“I’m a person who prefers to play games rather than train.” – Mesut Ozil

“It makes me very happy when I create goals or score goals myself, but the most important thing is that the team reaches its goal and plays positive football.” – Mesut Ozil

“People wrote so negatively about me, but generally, the people who are familiar with football know my strengths and abilities.” – Mesut Ozil

“I’m one of the best players in the world in that No.10 position. Fans, coaches, players, and everyone knows that my best position is as a playmaker.” – Mesut Ozil

“I’m the third generation. I was born in Germany, grew up in Germany, and many of my friends are German. I love playing for Germany. I’m proud I can play for the national team.”
– Mesut Ozil

“I was voted three times Germany’s national player of the year, and that is decided by the fans. That shows the fans are there for me and believe in me.” – Mesut Ozil

“I used to wear the German shirt with such pride and excitement, but now I don’t. I feel unwanted and think that what I have achieved since my international debut in 2009 has been forgotten.” – Mesut Ozil

“What the manager says is what’s important to me. What experts say doesn’t interest me and never will. I know what I can do. I’ve not been playing at the top level for nothing. I’ve been successful.” – Mesut Ozil

“I have played for Real Madrid, which is such a big club and where the pressure is so huge because you have to go and, really, win absolutely every game. There is no game where people don’t expect you to win. So, having played there for three years, pressure is nothing that would scare me.” – Mesut Ozil

“I’ve played for Real Madrid, where the pressure is so huge because you have to go and really win absolutely every game.”
– Mesut Ozil

“I love playing football. So I go out to play football, and I don’t really feel pressure. Of course, there are some days when things just don’t work out as well as they do on other days, but that doesn’t have anything to do with pressure.” – Mesut Ozil

“As players, you can’t decide who manages the club. I had a great manager, Jose Mourinho, who really helped me. He was always there when I needed him.” – Mesut Ozil

“Mourinho is the best coach in the world and I love him like a father.” – Mesut Ozil

“Wenger and I had a long conversation before I joined Real, and that’s how I got to know about Arsenal and the way that they like to sign talented players who can move the ball well.” – Mesut Ozil

“Arsenal belongs as one of the best clubs in the world, and London is a great place to be, a great city to live in.” – Mesut Ozil

“I am happy to be playing in the Premier League because everyone knows it is the strongest league in the world. There are simply a lot of top teams.” – Mesut Ozil

“Anybody can miss a penalty.”
– Mesut Ozil

“I’m so proud to play for a big club like Arsenal. Of course, the Premier League is the most difficult league in the world because it’s so even. I think you can’t really compare other leagues with the Premier League. In the Premier League, every team can beat every team, and in football, that’s something where you can have surprises.” – Mesut Ozil

“Of course, the best thing, if you play in the Premier League, you can always develop further as a player, and you are playing against the best players. You are also playing game after game all the time, two or three games a week.” – Mesut Ozil

“The Premier League is the best league in the world; it’s so strong. The smaller teams love to try their chances against the big ones, and this is why the game goes back and forth. That can be strenuous, tough on you and your body, but I really love it.” – Mesut Ozil

“I am very happy that I have great fans. What I can tell them is they must work on themselves; they should just have fun at what they do. I wish them well with everything, and if they really enjoy what they do, then I think they can go a long way. I will be rooting for them to achieve that.” – Mesut Ozil

“Everyone has a right to say what they want, but what they have to say doesn’t interest me.” – Mesut Ozil

“If you want, you can overcome all: Pressure, expectations, gravity.” – Mesut Ozil

“You can let your smile change people, but don’t let people change your smile” – Mesut Ozil

“The Key to failure is trying to please everyone.” – Mesut Ozil

“I am very, very proud I am also Turkish and both of my parents are from Turkey. I was born in Germany and grew up there. By playing football, I learned about different cultures, and that is an advantage if you grow up as a person. You get a different view on certain things. I’m very, very thankful I was able to pick the best from many cultures.” – Mesut Ozil

“Every day I pray, and you can see that I pray on the pitch. I pray in the dressing room. That is just part of my life.” – Mesut Ozil

“Even in your hard times, He has never left from your side” – Mesut Ozil

“Without dreams, we reach nothing, without love we feel nothing, and without God, we are nothing” – Mesut Ozil

“I come from a background where you don’t show off the good things you do. It’s modesty.” – Mesut Ozil

“Things I didn’t have in the past I try to give to kids. I know how it feels not to have things. We were poor, but we had enough food to eat. It was a big family, four kids, and it was not like you could just go and buy something. But we had the essentials, the food.” – Mesut Ozil

“I want to help people in need, but I don’t want people to know I’m doing it.”
– Mesut Ozil

“My aim is helping kids. Kids are the future. I love children. I’m thinking of my own childhood. I know where I’m from. If I wanted something, I couldn’t get it. Life wasn’t easy.” – Mesut Ozil

“I was never a guy who liked to be in the center of attention.” – Mesut Ozil

“For us, it wasn’t important to have a big house, a few cars, always have the newest clothes. Solidarity as a family was important. We were there for each other and always will be.” – Mesut Ozil

“When I look into the future and where I’d like to live, I’ll say Germany because I grew up there and like the discipline the people have. But my background is from Zonguldak in Turkey. I’m there a lot.” – Mesut Ozil

“I simply love to live here. London is a world city. There is so much you can do. There are many different cultures here, and I just feel very, very comfortable.” – Mesut Ozil

May these Quotes on Beauty give you the inspiration to get better in your life. Things are beautiful if you love them. Everything has beauty...

Living this life is the most beautiful journey we will ever get to go on. Gratitude is incredible for your wellbeing...

60 Inspirational Quotes for Knowing your Weakness

Know your weakness Quotes. Learning about your weaknesses is a crucial thing in developing yourself to become a better person. Weakness quotes