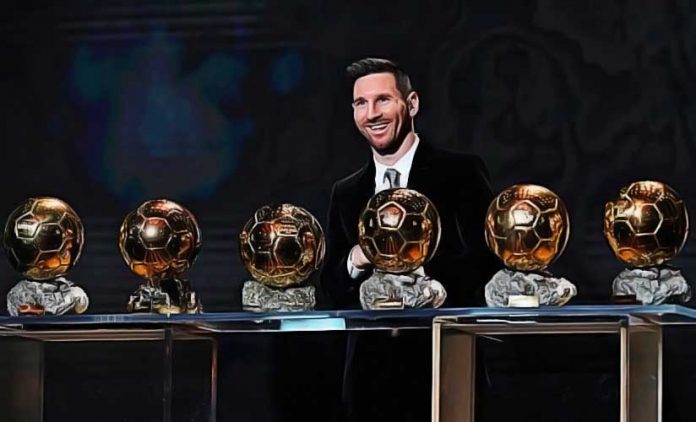 Looking for interesting and inspiring Quotes by Lionel Messi? If so, then you are completely in the right place. But before that, let us get to know the background of this famous figure.

Lionel Andrés Messi was born on 24 June 1987. He is an Argentine professional footballer who plays as a forward and is the captain of the Argentina national team. Famously known during his time at FC Barcelona, Lionel Messi is currently playing at Paris Saint Germain in Ligue 1.

He is always being compared to Cristiano Ronaldo for their performance on the field. But, in the end, no one can disagree with the statement that Lionel Messi and Cristiano Ronaldo are on a different level from the other footballers.

In fact, they always compete with each other to win either Ballon d’Or awards European Golden Shoes where Lionel Messi has won slightly more than Cristiano Ronaldo. From his academy days until now, he has spent all his career with Barcelona.

He won various titles and competitions, including La Liga titles, UEFA Champions League titles, and Copas del Rey. Then, the rest is history.

Thus, to become successful, you need to get advice from a successful person. Without further ado, let’s be inspired by Lionel Messi’s quotes.

“Barcelona gave me everything, they took a chance on me when nobody else would. I never have any desire to play for anybody else, I will be here for as long as they want me.” – Lionel Messi

“I don’t know, I’ve liked football since I was a kid and I’ve always dreamt of becoming a professional footballer, I never thought of any other job.” – Lionel Messi

“I’m always proudest whenever I’ve been part of a trophy-winning team. Lifting a title makes me feel so happy because it’s what I want to do in football: be successful.” – Lionel Messi

“Every year I try to grow as a player and not get stuck in a rut. I try to improve my game in every way possible. But that trait is not something I’ve worked on, it’s part of me.” – Lionel Messi

“It doesn’t matter if I am better than Cristiano Ronaldo, all that matters is that Barcelona are better than Madrid.” – Lionel Messi

“When the year starts the objective is to win it all with the team, personal records are secondary.“ – Lionel Messi

“I don’t need the best hairstyle or the best body. Just give me a ball at my feet and I’ll show you what I can do.” – Lionel Messi

“I’m lucky to be part of a team who help to make me look good, and they deserve as much of the credit for my success as I do for the hard work we have all put in on the training ground.” – Lionel Messi

“This is much more than I dreamed about as a boy. I want to thank football in general for what it has given me.”
– Lionel Messi

“Whether it’s a friendly match, or for points, or a final, or any game – I play the same. I’m always trying to be my best, first for my team, for myself, for the fans, and to try and win.” – Lionel Messi

“Football has been my life since I was a kid. My style remains the same, I love every single minute I get on the pitch. I know I have a great responsibility, and that there are objectives to accomplish, but I try to have fun too, because that’s what I love to do.” – Lionel Messi

“I go out and do the best I can in each game, and I don’t think about the fouls other players will commit or whether I might be injured. It only does you harm to worry about those things.” – Lionel Messi

“I still have a lot of room for improvement. For example, I want to shoot equally well with both feet.” – Lionel Messi

“I have fun like a child in the street. When the day comes when I’m not enjoying it, I will leave football.” – Lionel Messi

“I’m not the sort of guy who shouts and screams before a match.” – Lionel Messi

“It’s an honor to be recognized like that [the best player]. But Barca is not just Messi. Barca has very good players.” – Lionel Messi

“I try to use pressure to help me in every game. Pressure helps me do things to the best of my ability. I like it. I don’t feel pressure; quite the contrary, because I always enjoy what I’m doing and that’s playing football.” – Lionel Messi

“I am competitive and I feel bad when we lose. You can see it in me when we’ve lost. I’m in a bad way. I don’t like to talk to anyone.” – Lionel Messi

“On a personal note, I think it won’t be until after I’ve retired that I’m fully aware of what I’ve done or what I’ve gone on to achieve in my career.” – Lionel Messi

“I never think about the play or visualize anything. I do what comes to me at that moment. Instinct. It has always been that way.” – Lionel Messi

“Something deep in my character allows me to take the hits and get on with trying to win.” – Lionel Messi

“Little by little, I’m getting better all the time. I’ve not lost the passion to play.” – Lionel Messi

“Everything that’s happened to me in my career has been special, even the tough times because they leave marks on you that shape your life.” – Lionel Messi

“I start early and I stay late, day after day, year after year, it took me 17 years and 114 days to become an overnight success.” – Lionel Messi

“It takes sacrifice as well as talent.” – Lionel Messi

“My ambition is to always get better and better.” – Lionel Messi

“Sometimes you have to accept you can’t win all the time.” – Lionel Messi

“Being named among the best at something is special and beautiful. But if there are no titles, nothing is won.” – Lionel Messi

“I’m never satisfied. I always push my limits and I always try to get better every day.”
– Lionel Messi

“The best decisions aren’t made with your mind, but with your instincts.” – Lionel Messi

“To be honest, I never realized it. I never really thought that I was going to be really good or not. I just wanted to make my dream come true.” – Lionel Messi

“Whether it’s a goal, or winning a game, I’m never satisfied.” – Lionel Messi

“Day-to-day motivation isn’t a problem for me.” – Lionel Messi

“You cannot allow your desire to be a winner to be diminished by achieving success before and I believe there is room for improvement in every sportsman.” – Lionel Messi

“Every time I start a year, I start with the objective of trying to achieve everything, without comparing it to how I’ve done in other seasons.” – Lionel Messi

“There’s nothing more satisfying than seeing a happy and smiling child. I always help in any way I can, even if it’s just by signing an autograph. A child’s smile is worth more than all the money in the world.” – Lionel Messi

“Being a bit famous now gives me the opportunity to help people who really need it, especially children.” – Lionel Messi

“It was hard for me because it was such a big change. I left a lot behind in Argentina and unlike other children living at the Masia, I hardly ever got to visit my family. I only saw them once or twice a year and that was very hard for me.” – Lionel Messi

“My family was always present when I needed them and sometimes felt even stronger emotions than me.” – Lionel Messi

“I am a normal person. I have the same life as any human being. When I finish playing, doing my work, I have my family, my friends, and I live like any other person.” – Lionel Messi

“Today I am the happiest man in the world, my son was born and thanks to God for this gift.” – Lionel Messi

Previous article
Cristiano Ronaldo Quotes: Football, Success, and Life
Next article
Unmotivated to Work: What to Do?

Success Lessons We Can Learn from Ritesh Agarwal

Ritesh Agarwal, CEO of Oyo Rooms, became the world’s second-youngest billionaire in 2020. Five success lessons we can learn from him...

Mesut Ozil quotes on success. Mesut ozil quotes about life. Ozil has been nicknamed “The Assist King” due to his heroic performance...

How to Stop Being Lazy: 10 Ways to Get Back the Motivation

How to Stop Being Lazy and Unmotivated? Know the difference between being lazy and needing rest or use the Pomodoro method...

May these What Goes Around Comes Around Quotes give you the inspiration to get better in your life. Everything you do will comes back around...

Education is the Key to Success

Education can be one of the most important components in creating success. Here are 7 ways that show Education is the key to success...