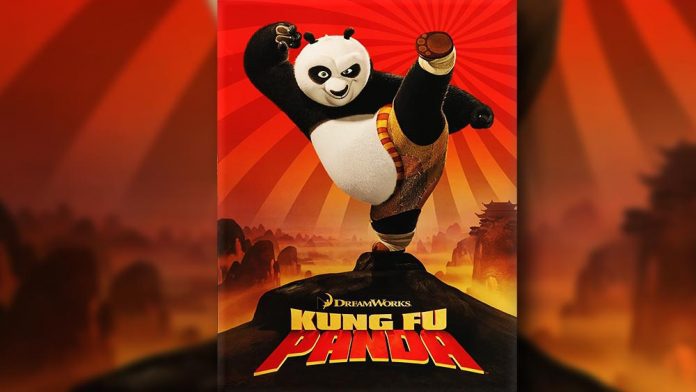 May these Kung Fu Panda Quotes give you the inspiration to get better in your life. Kung Fu Panda Movie is an animation produced by DreamWorks Animation in 2008. It was created by Ethan Reiff and Cyrus Voris who are American screenwriters and producers.

They are known for their work in both feature films and television. Kung fu panda has been starred by Jack Black which holds the character as Po, the main character, panda and the Dragon Warrior.

Besides that, it also starred by Angelina Jolie as Tigress, Dustin Hoffman as Master Shifu, Seth Rogen as Mantis, Jackie Chan as Monkey, Lucy Liu as Viper and also David Cross as Crane.

Kung Fu Panda is a story about the adventure and journey of a Panda to become a Dragon Warrior. The panda, named Po, is the only panda who lives in the Valley of Peace. He may be the Valley of Peace’s laziest, clumsiest panda, but he has a big dream to join the kung fu legend in the Valley, which is called the Furious Five.

The journey starts when Master Oogway receives a vision from the universe. The vision is about the villainous snow leopard Tai Lung will escape the prison and threaten Po’s homeland, and only the Dragon Warrior can stop it and defend the Valley from attack.

So, Po begins an epic high-kicking adventure under Master Shifu as he sets out to defeat Tai Lung’s wicked designs. Here are more than 60 beautiful quotes from Kung Fu Panda movies that you can use to give yourself some inspiration.

“He was so deadly in fact, that his enemies will go blind, from overexposure to pure awesomeness.” – Po

“There is no charge for awesomeness and attractiveness.” – Po

“It mattered not how many foes he faced. They were no match for his bodacity. Never before had a panda been so feared and so loved.” – Po

“But hanging out would have to wait. Cause when you’re facing the ten thousand demons of demon mountain. There is only one thing that matters and that’s…” – Po

“Oh, happy day. My son is finally having the noodle dream. You don’t know how long I have been waiting for this moment. This is a sign, Po. You are almost ready to be entrusted with the secret ingredient of my secret ingredient soup. And then you will fulfill your destiny and take over the restaurant.” – Mr.Ping

“We all have our place in this world. Mine is here and yours is…” – Mr. Ping

“Well done, students, if you were trying to disappoint me.” – Master Shifu

“Why must something be wrong for me to want to see my old friend?” – Master Oogway

“Nothing is impossible.” – Master Oogway

“One often meets his destiny on the road he takes to avoid it.” – Master Oogway

“Your mind is like this water my friend. When it is agitated it becomes difficult to see. But if you allow it to settle, the answer becomes clear.” – Master Oogway

“Who is worthy to be trusted with the secret to limitless power to become the Dragon Warrior?” – Master Shifu

“We’ve been waiting a thousand years for this. Just take the bowl! This is the greatest day in Kung Fu history! Don’t worry about it. Just go!” – Po

“Yes. The one I feared I would not live to see.” – Master Oogway

“Now know this old friend whomever I chose will not only bring peace to the valley, but also to you.” – Master Oogway

“I sense the Dragon Warrior is among us.”
– Master Oogway

“The universe has brought us the Dragon Warrior.” – Master Oogway

“There are no accidents.” – Master Oogway

“You think it is that easy? That I’m just going to hand you the secret to limitless power? One must first master the highest level of Kung Fu and that is clearly impossible if that one is someone like you.” – Master Shifu

“You picking on my friends? Get ready to feel the thunder.” – Po

“The Dragon Warrior fell out of the sky in a ball of fire. When he walks, the very ground shakes.” – Crane

“You guys were so totally amazing at the battle of the Weeping River. Outnumbered a thousand to one. But, you didn’t stop. You just,…” – Po

“You are too concerned with what was and what will be. There’s a saying; Yesterday is history, tomorrow is a mystery, but today is a gift. That is why it is called the present.” – Master Oogway

“Step forth! The true path to victory is to find your opponent’s weakness. And make him suffer for it. To take his strength and use it against him. Until he finally falls or quits.” – Master Shifu

“And when the boy showed talent in Kung Fu Shifu trained him. He believed in him. He told him he was destined for greatness.” – Tigress

“He wanted the Dragon Scroll. But Oogway saw darkness in his heart and refused.” – Tigress

“Shifu loved Tai Lung like he had never loved anyone before. Or since. And now he has a chance to make things right. To train the true Dragon Warrior. And he is stuck with you.” – Tigress

“There is just news. There is no good or bad.”
– Master Oogway

“That is bad news if you do not believe that the Dragon Warrior can stop him.” – Master Oogway

“My old friend, the panda will never fulfill his destiny, nor you yours, until you let go of the illusion of control.” – Master Oogway

“Look at this tree Shifu, I cannot make it blossom when it suits me, nor make it bear fruit before its time.” – Master Oogway

“But no matter what you do, that seed will grow to be a peach tree. You may wish for an apple or an orange but you will get a peach.” – Master Oogway

“Maybe it can. If you are willing to guide it. To nurture it. To believe in it.” – Master Oogway

“You must believe.” – Master Oogway

“It is said that the Dragon Warrior can survive for months at a time on nothing  but the dew of a single Gingko leaf and the energy of the universe.” – Tigress

“You will beat him because you are the Dragon Warrior.” – Master Shifu

“But now I ask you to trust in your Master as I have come to trust in mine.”
– Master Shifu

“Yeah, I stayed. I stayed because every time you threw a brick at my head or said I smelled, it hurt, but it could never hurt more than it did every day of my life just being me. I stayed because I thought, if anyone could change me… could make me… not me… it was you. The greatest Kung Fu teacher in all of China.” – Po

“Panda, we do not wash our pits in the pool of sacred tears.” – Master Shifu

“This is where Oogway unraveled the mysteries of harmony and focus. This is the birthplace of Kung Fu.” – Master Shifu

“When you focus on Kung Fu, when you concentrate… you stink. But perhaps, that is my fault. I cannot train you the way I have trained the Five. I now see that the way to get through to you is with this.” – Master Shifu

“I heard how he fell out of the sky on a ball of fire. But he’s a warrior unlike anything the world has ever seen.” – Tai Lung

“The mark of a true hero is humility.” – Master Shifu

“He could have killed you. So, you could come back and strike fear into our hearts.” – Master Shifu

“But you will have the one thing that no one else does.”
– Master Shifu

“No one knows. But legend says you will be able to hear a butterfly’s wings beat. And see light in the deepest cave. You will feel the universe in motion around you.” – Master Shifu

“There is no secret ingredient. It’s just you.” – Po

“Obeying your master is not weakness!” – Master Shifu

“You are the dragon warrior. You have brought peace to this valley and to me. Thank You Po.” – Master Shifu

Quotes on regret in love. No matter how strong you are, you just cannot simply get rid of regret. We all say things that we later regret...

What Drives You to Be Successful? 4 Things to Motivate You

Lots of people make goals, but a large majority fail to meet them. Why do people give up on their goals? They don't believe in themselves...